I added a post yesterday about my newest painting experiment with pastel mat and showed you the stages. After I thought I was done, I still kept fooling with it and rubbing the pastel on the right side with more blue.

As I did this a flaw in the surface began to appear. This flaw would not be covered with pastel–no matter how much I added. Since I was unfamiliar with the surface (this was my first painting on it), I was unsure what to do to fix it and how to proceed. It looked like I would have to start over. I was not willing to sacrifice my wolf and all the time I put in to its creation. So where do you go to get answers?? The internet.

After searching, I took a paintbrush and wet it and then brushed over the area with water and let it dry overnight. This morning I awoke to a large even spot on my painting. The flaw was evened out but now I had a spot:(  I added more pastel and guess what? My flaw returned. I then tried brushing off excess pastel(outside) and then spraying the area with fixative.  After it dried , I applied more pastel. Guess what?? The flaw returned.   Sigh….

Then I decided that since the painting was probably a goner, I added a darker color over the blue I had used on the right hand side. I brushed the blue off first so as not to have too much pastel dust on the painting. It worked very well!! I was relieved and glad to save my painting.

It also looks much better to have darkened that side. The wolf now lives in the space and the dark adds depth to the painting. 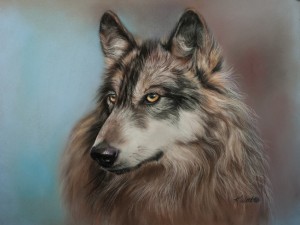 Kay offers a variety of art classes throughout the year. To see the current schedule click here.